blogs.phoenixnewtimes.com on May 10, 2013 released the following:

“The U.S. Department of Treasury placed sanctions on eight Mexican cartel bosses in the north of the country, each of whom controls smuggling routes and cities for the Sinaloa Cartel called “plazas.”

The Sinaloa Cartel is the largest and oldest of the Mexican cartels. Throughout the drug war and internecine battles between smuggling groups, the Sinaloa Cartel has managed to remain fairly intact. Joaquin “El Chapo” Guzman is believed to be the leader of the criminal group, and Forbes has listed Guzman as one of the most powerful people in world, estimating his net worth to be around $1 billion.(Forbes took Guzman off their 2013 list.)

The eight men accused of working for the Cartel have been designated as drug smugglers under the Kingpin Act, which freezes any assets in the U.S. the men might have had and outlaws Americans from doing business with them.

“Today’s designation marks another step in [the Office of Foreign Assets Control] efforts to specifically target the narcotics traffickers responsible for the horrific acts of violence committed along the Arizona border with Mexico,” Adam Szubin, director of the OFAC, said Tuesday.

They’re accused of controlling smuggling operations along the 375 mile U.S.-Mexico border, including Arizona border towns like Sonoyta, Nogales and Agua Prieta. The bosses each run a town used as a shipping point for drugs, and also oversee the flow of guns and cash from the U.S. back to Mexico to fuel their war and increase their market share of smuggling routes.

The Sinaloa Cartel is also thought to play a major role in the kidnappings and murders across Mexico. Some experts put the death toll in Mexico because of drug violence around 100,000.

“In order to put organizations like the Sinaloa Cartel out of business, we must continue to utilize every tool available to ensure that these criminal groups and their associates cannot exploit the U.S. financial system,” Coleman says.

Here’s a picture that points out each of the bosses and the plaza they control (Click here to view a larger image). 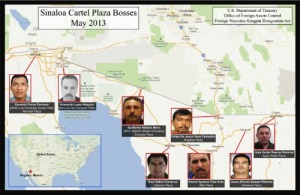 The author of this blog is Douglas C. McNabb. Please feel free to contact him directly at mcnabb@mcnabbassociates.com or at one of the offices listed above.

International criminal defense questions, but want to be anonymous?